Truth About the Arrogant and Corrupt War on Drugs,
From Government Agents and Other Insiders

Several dozen present and former government agents and operatives, and former drug traffickers, provide the author, Rodney Stich–also a former federal investigator–with thousands of hours of secret insider information, thousands of documents, and other data during the past 20+ years, revealing the government’s arrogant and sham war-on-drugs. Their information can provide you with case studies and evidence revealing a spreading cancer of corruption within the three branches of the federal government.

It is important to realize that the corruption in key government offices and the tragic effects upon the American public goes far beyond the area of drugs. For a fuller understanding of this complex scenario, read and understand the contents in the books written by former federal agent Rodney Stich in collaboration with dozens of other former government agents and insiders, including the classic, Defrauding America and Drugging America. Understand how this misconduct by people in control of key government offices have caused or made possible great harm upon the people in many areas, often on sham or greatly exaggerated drug charges, or upon being set up, or through the use of perjury and bought testimony.

The value of this site is that it provides accurate factual information on the intrigue and corruption in overt and covert government operations, explains why the people do not know about these matters, how the American public (and others) have suffered and continue to suffer the consequences.

The host responsible for this site, and the related books, began  his insider experiences in the U.S. Navy, starting in 1940, a year before the Japanese attack upon Pearl Harbor. He was a Navy Patrol Plane Commander, the youngest PPC in the Navy during World War II.

He was an international airline captain, with periodic residence and flying in the Middle East at a time when Iranians and Arabs throughout the Middle East liked Americans. It was the covert activities ordered by U.S. politicians that changed this friendship in each of these countries to where more people want to kill Americans than at any time in the world’s history.

The host has no agenda other than to provide true information to the public with the hope (forever an optimist!) that enough people have the backbone and loyalty to the country to get off their rear ends, learn about these matters, and help bring a halt to the corruption.

In lieu of the vast numbers of people and groups implicated, and the extent of the cover-ups, deception, and outright lying from media people, corporate media, and political pundits, it is doubtful that this culture will be addressed. Therefore, younger people should expect a continuing and worsening number of catastrophic consequences. For those, the age of the host, the worst will probably occur after they are gone. The host spent over 40 years in a David vs. Goliath battle to defend the country against the Trojan horse corruption. Shortly, someone else can take over that thankless task.

The harm from these activities is not simply academic. Countless lives have been ruined, families torn apart, innocent people, or those guilty of minor offenses, have been sentenced to prison for many years, or for life. These conditions will continue, until enough good people exercise some semblance of outrage and courage to halt these human tragedies.

A World That Most People Don’t Know Exists

The information at this site, and in the related books. will show you a world that most people don’t know exist. They will show you conditions that gives the reader an entirely different perspective on what goes on in the United States, and reveals extremely troubling conditions. They will certainly increase your knowledge of intrigue in government. And they are also, in some ways, similar to a mystery novel, except that the facts are true.

For the amazon.com page where all the books are listed that were written by former federal agent Rodney Stich, click here for a list of all the books.

Some background on the person primarily behind this website.

Highlights of a few of the issues in the various books can be found in the informational display ads that appeared for several years in mainstream publications.

Some of the Benefits from Reading Drugging America:

For those few men and women who know of the arrogance and corruption in the three branches of the federal government and who really want to conduct a meaningful fight or help to do so, there is an abundance of documented material that has been accumulated by a group of present and former government agents that can be used to force changes and bring about relief to many victims.  This is not “preaching-to-the-choir” material that does nothing except placate a small group unable to see the bigger picture; it is heavy stuff.

Providing fly-on-the-wall insider information about the arrogant and felonious misuse of government offices and power are the following:

The culture of corruption in government, and the culture of cover-ups throughout the United States, associated with the arrogant and corrupt war on drugs are the same cultures responsible for other forms of corruption, other causes for harm to Americans, and other causes for subverting national interests. More details on these other areas are found at the Defrauding America Internet site.

America’s political prisoners. Federal agents, deep-cover operatives, and concerned American citizens, who have been sent to prison on fabricated charges to prevent them from reporting to the American people the corruption within the CIA, DEA, Justice Department, and other federal offices. These are political prisoners, and many of them are the true American heroes who fought to bring to justice high-level criminal activities, and who were fraudulently charged and sent to prison.

A Fact of Life Unrecognized by Most Americans

A poem was written by Martin Niemoller that depicts a fact of life that most Americans have yet to learn:

Pastor Martin Niemöller (1892–1984) first supported the rise of Adolf Hitler, and then upon learning the truth, and objecting, he was imprisoned. He wrote a poem about the state of denial of Germans about what Hitler was doing. Probably no better example could be shown than what has been done to the American people, in their name, while they lazily ignored the outrages.

College education on corrupt government personnel and secret activities, as revealed by dozens of government insiders.

Sample of comments by readers of Stich’s books.

Links to other sites, including groups seeking to correct the draconian prison sentences, forfeiture statutes, and conspiracy statutes, that threatens every man and women in the United States, and to bring about the release of thousands of men and women who were guilty of none of the charged offenses, or guilty of offenses justifying a small punishment rather than a literal death sentence.

Order form to obtain Drugging America or any of the dozen or more other books written by former federal agent Rodney Stich in collaboration with dozens of other former government agents and insiders.

Assist our cause by making donations to Ombudsmen To Promote Integrity In Government, which is a corporation  with tax exempt status  under the federal Internal Revenue Code 501(c)(3). Any donations will be used strictly for educating the public and seeking to provide help for those who have been victimized, and try to reduce the number of others who will be victimized by the arrogant and corrupt culture in government. Tax deductible donations can be cash, real estate, airplanes, real estate, and other items that can be handled by us.

RADIO AND TELEVISION HOSTS AND PRODUCERS: Sampling of thought-provoking questions and issues that could be discussed during Stich’s appearance, based upon the data in Drugging America, A Trojan Horse.

Rodney Stich can be contacted at POB 5, Alamo, CA 94507, or by e-mail to stich@unfriendlyskies.com.

Email address for the author and activist against corruption in government: stich@unfriendlyskies.com.

For more information relating to the author and his activities put “Rodney Stich” into a search engine such as Google or yahoo.com. The links run into many tens of thousands.

Download DVD videos from amazon to rent or to buy, onto your Windows XP operation system computer. For more information.

Hot cell phone and service deal from amazon.com, with 30-day return if not satisfied.

Consider placing orders for any product from amazon.com through the following links. There is no extra cost or delay in doing this, while it provides us a small commission to help fund this site and our public-spirited efforts. 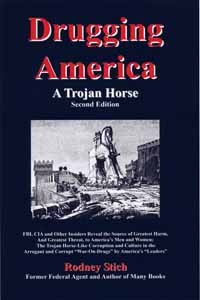 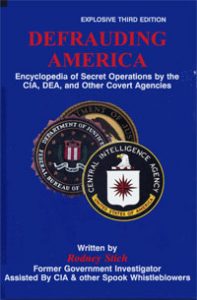 Reader comments sent to the author.

Culture of corruption throughout government.

Parallel consequences of corruption in government to September 11 hijackings 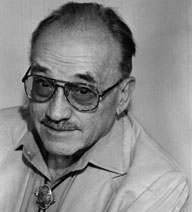 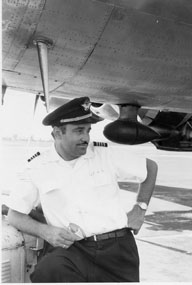 Captain Rodney Stich, Japan Airlines and while flying Muslim pilgrims in the Middle East to the holy cities of Mecca and Medina. 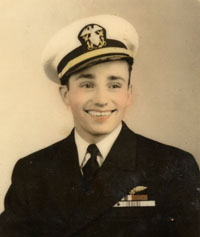 Rodney Stich as a Navy patrol plane commander (PPC) during World War II, fighting a different type of enemy of the United States than what he had been doing for the past 40 years.